What Is A Group Of Jellyfish Called? 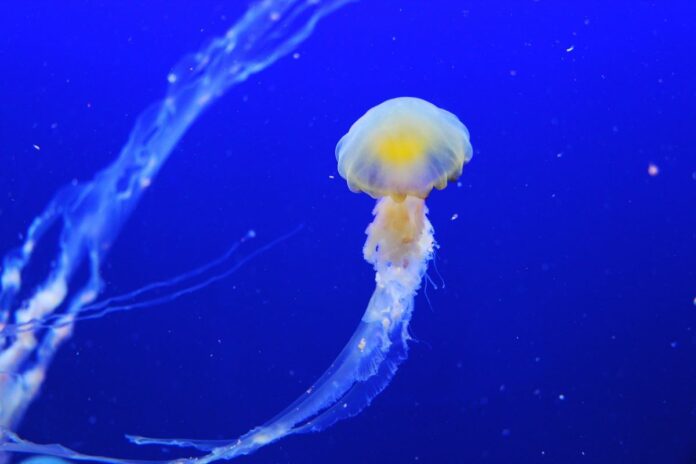 Jellyfish usually form clusters called smacks, blooms, or swarms. Despite the fact that these terms are used interchangeably, they refer to a specific group of jellyfish. An occurrence of plants or animals suddenly appearing in groups is called a bloom. Furthermore, it reflects a seasonal aspect when the surrounding settings are suitable for their gathering. So, ‘bloom’ refers to a sudden influx of jellyfish in a small area in large numbers. Jellyfish usually form their benthic polyps during spring. During this period, sunshine is plentiful and plankton is abundant, and suddenly there is a great deal of jellyfish spotted in areas with favorable conditions.

Smack is another collective term for a group of jellyfish. It is a colloquially literal term that is not used by scientists and researchers who study these creatures.

In common parlance, the word ‘swarm’ is used to describe some creatures’ tendency to stay together in a group. Jellyfish possess this ability, therefore a group of them is also called a swarm.

Why Is A Group Of Jellyfish Called A Smack?

Do you know that box jellyfish are perhaps the most poisonous of all marine animals? The venomous tentacles of certain types of boxfish, like the malo kingi or the Irukandji jellyfish, can cause people to suffer cardiac arrest or even kill them within minutes.

Is there a literal meaning for the word “smack?” Of course! It means to slap or strike with the palm in order to punish someone. You feel the same way when you accidentally step in a group of jellyfish and get stung by them.

In some instances, the sting can be fatal. The collective noun smack is used to describe a group of jellyfish and therefore has a more literal meaning than a scientific one. Smack, however, is often used in regards to certain jellyfish species, like the box jellyfish.

What Is A Group of Baby Jellyfish Called?

You may sometimes see baby jellyfish instead of the bigger ones. Should they be called blooms or swarms, as with the large groups?

Apparently, you can refer to them by these names. Nevertheless, the baby jellyfish have another particular term just for them. They are called Ephyra. This term was coined by scientists.

The next time you see a few new jellyfish coming towards you, you can say “a group of ephyra is approaching.” These babies that have just emerged from the polyps will later grow into medusae.

What’s most important is that, even if you see them, do not undervalue them and go nearby!

Do Jellyfish Live In A Group?

Have you ever seen multiple jellyfish under the sea? If you have, you may wonder if they group up intentionally or not. Would they be a type of social animal? This kind of question must be in your mind all the time, waiting for answers. Is that the case? Find the answers below!

Jellyfish do not normally live in groups and are not social animals. The smacks or blooms they form help them to move in the water current. However, these are not their actual way of life. Because they are brainless animals, they do this unintentionally.

There is still a mystery surrounding the social life of this fish. More research is needed in this regard. According to what’s known, they form groups, however, not for the purpose of exhibiting intentional schooling behaviors. Instead, they do it to provide protection underwater. It is obvious that smaller jellyfish species have more of this type of coverage. Bigger fish usually move alone. As a result, small jellyfish tend to group together more often than larger fish. But this is just an observation, not an established fact. That’s right!

What Causes Jellyfish To Move In Groups?

It is not uncommon to see jellyfish swarming together in ocean waters. Whenever we talk about jellyfish moving in a group, you might wonder why jellyfish move together. Are jellyfish social marine animals that travel and live in groups? Or do they form groups unintentionally by moving with the tide?

As you probably know, jellyfish don’t have brains. Hence, they do not live in groups to fulfill their social needs such as a company. To understand the social life of jellyfish, more research needs to be conducted. According to what we know so far about these fascinating marine creatures, jellyfish tend to travel in groups so they can wade through the water’s current. Most jellyfish species do not swim actively; they float with the current. Therefore, they do not travel in groups for typical schooling behavior, but to form coverings underwater for easy mobility.

It has also been observed that large species of jellyfish tend to move alone. The movement of jellyfish in groups is more common in species that are smaller in size.

What Is The Number Of Jellyfish In A Group?

Jellyfish blooms are a different phenomenon because they do not move in a collective group, but instead, represent a phase in their lifecycle when they transform from polyps.

While blooms can be attractive from a distance and are a sight to behold, they are detrimental to the fishing industry. Blossoms, for example, cause the fish catch to be of lower quality. By getting caught, they damage fishing gear, and they stall the growth of economically valuable fish species.

Swarms of jellyfish underwater are a sight to behold, as anyone who has ever seen them would know. Jellyfish blooms can number thousands, even in a small area, so it is unfeasible to calculate the exact number of jellyfish.

Now you know that the group of jellyfish is usually called a bloom or a swarm, despite having all those names. You should now be able to choose your own name. Make sure it isn’t too uncommon. In case you see a bloom nearby, you should warn everyone nearby and run for your life!