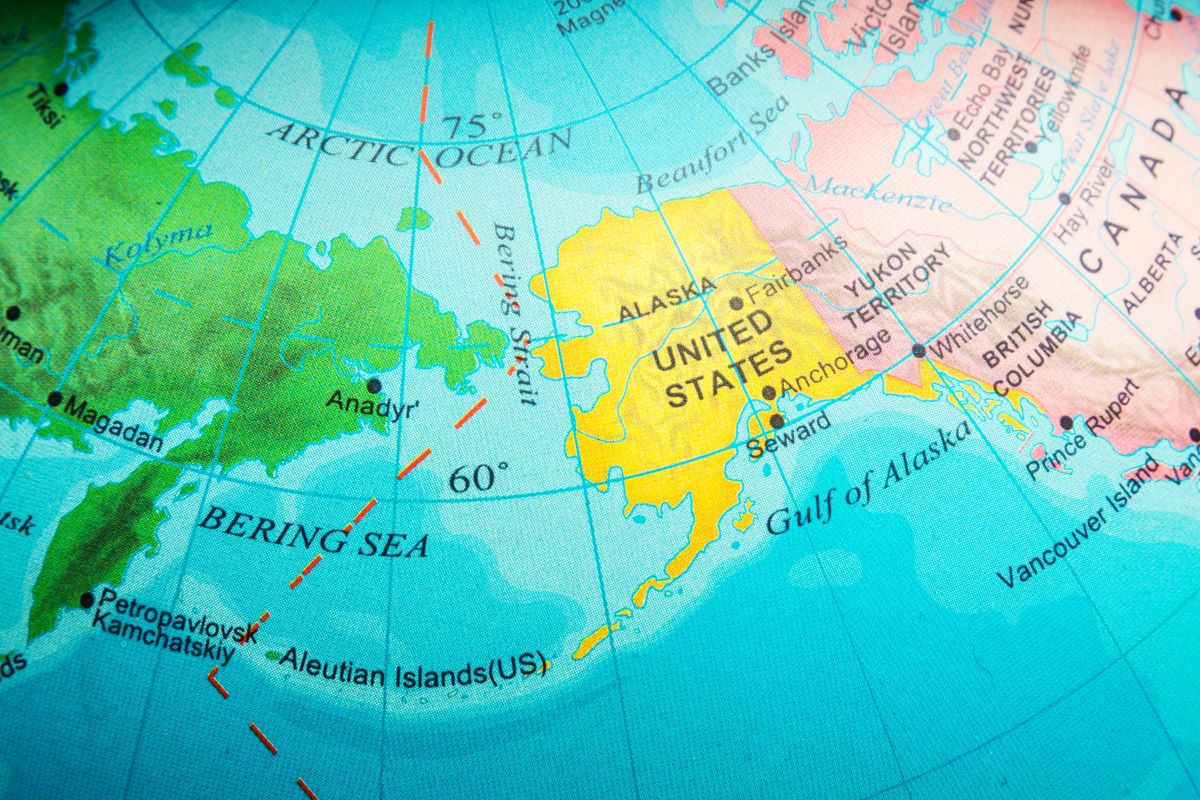 How Far Is Russia From Alaska? It’s Closer Than You Think! Alaska is one of those interesting places where it is part of the United States. Still, it is somehow more connected geographically to other countries, such as Canada or Russia. That is because Alaska is closer to these countries. How far is Russia from Alaska?

From mainland Russia to mainland Alaska, the closest gap between them is only 55 miles (88KM). However, suppose you compare the closest distance possible. In that case, the Russian island of Big Diomede and the Alaska Little Diomede island are only 2.5 miles (4KM) wide from each other. You can even walk from these islands during winter.

We also discuss if Alaska is closer to Russia than the United States and also if you can travel from Alaska directly to Russia.

Alaska is situated in the extreme northwestern North America, bordering Canada on its east. On the west are the Bering Strait and Russia. To its north are the Chukchi and Beaufort Seas, part of the Arctic Ocean, while the Pacific Ocean is in the south and southwest.

Alaska is a state within the United States of America located in the far northwest of North America. Alaska does not have a physical border with any US states. Still, it shares a land border with Canada and a maritime border with Russia.

The land border of Alaska is connected to the Canadian territory of British Columbia and the Yukon Territory to the east. To the west, Alaska shares a maritime border with Russia’s Chukotka Autonomous Okrug, with the Bering Strait between them.

Alaska’s north is the Chukchi and Beaufort seas, part of the Arctic Ocean. These seas are almost entirely frozen all year round. To Alaska’s south and southwest is the Pacific Ocean.

Alaska is the largest state in the United States, more than twice the size of the US’s second largest state, Texas. Alaska is also larger than the next three largest US states combined: Texas, California, and Montana.

Alaska’s capital city is Anchorage, and some other of the larger cities in Alaska include Juneau and Fairbanks.

Russia is the biggest country by size in the world and spans from eastern Europe to Northeast Asia. It shares land borders with over 14 countries. To its north lies the Arctic Ocean. To the east lies the Bering Strait, the Sea of Okhotsk, and the Sea of Japan, creating maritime borders between the US, Japan, and North and South Korea.

Russia is a large, transcontinental territory, spanning Eastern Europe to Northern and North East Asia. It is the biggest country in the world by area and encompasses one-eight of Earth’s inhabitable land mass.

Russia shares borders with fourteen countries. Such as Latvia, Ukraine, Kazakhstan, Mongolia, China, and North Korea. These border countries are on the west, southwest, southeast, and southeastern part of Russia.

To Russia’s north lies the Arctic sea and its array of seas. To its east, the Bering strait separates mainland Russia from North America, namely the state of Alaska.

In Russia’s southeast lies the Sea of Okhotsk and Sea of Japan, which sets the maritime boundary between Russia and Japan, and North and South Korea.

Some of Russia’s major cities include St. Petersburg, Vladivostok, Kazan and Sochi. The capital city of Russia is Moscow.

How Far Is Russia From Alaska?

When measured, the distance between mainland Russia to mainland Alaska is around 55 miles (88KM). The mainlands were separated by the Bering Strait. The Alaskan island of Big Diomede and the Russian Little Diomede Island is only 2.5 miles (4KM) wide from each other.

When measuring the distance between Russia and Alaska, you may do so in several ways.

Measuring the distance between the towns and settlements of Russia and Alaska makes sense. This is because humans usually travel between the two cities, which makes it suitable as a measurement.

The eastern point of mainland Russia is Chukotsky District. In contrast, the westernmost point of mainland Alaska will be Wales town. The distance between these two points is around 55 miles (88KM). They are separated by the Bering Strait.

The best part about this distance is that during winter, the seas between these islands froze, which means you can technically walk from Alaska to Russia, by walking from Big to Little Diomedes island.

You may like this article: Is Alaska Bigger Than Texas?

How Far Is Alaska From Continental United States?

To calculate the distance between the continental United States and Alaska, you have several options. You can measure the direct distance or measure the actual driving distance.

However, this distance may only be theoretical and not practical in any way. This is because traveling between the two locations may involve more issues, such as the availability of roads or plane pathways.

If you drive between Alaska and the continental United States, you will be looking at starting from the Alcan Border, Alaska. You will then drive across Canada, along the Alaska Highway, and eventually enter the continental US via the town of Blaine, Wacom county, Washington.

The total driving distance between would be around 1768 miles (2845KM). The distance may take around 33 hours of driving to cover, so you will need to dedicate multiple days to make the journey.

If you fly from Alaska to the continental United States, you are probably looking at flying between Juneau and Seattle. The distance between these two cities is 909 miles (1493KM). It may take around two hours and 13 minutes to cover the flight journey.

Is Alaska Closer To Russia Or Continental United States?

To determine the answer to this question, you may also need to consider several calculation methods, first is the direct distance. Second, you can also consider between major cities, and finally, between the capitals.

If you measure by direct distance, then Alaska is closer to Russia. This is because the distance between the Big and Little Diomedes is only 2.5 miles (4KM). In fact, during winter, the seas around the islands turn into ice, meaning you can actually walk from Alaska to Russia.

Another way to measure is to look at the major population centers between Alaska, Russia, and the continental US and calculate the distance. This may make more sense, as people travel more between these cities. Using this criterion, Alaska is closer to the continental US than Russia.

You can also measure between capitals. Distance to capitals may be used to determine the political connection between territories at times. If we use this criterion, Alaska is closer to the continental US than Russia.

Can You See Russia From Alaska?

You can see Russia from Alaska. If you climb up to the highest point of Little Diomede Island in Alaska, you can see up to 37 miles (60KM) of distance. This allows you to look at the Big Diomede Island or Ratmanov Island.

There is no permanent settlement on Big Diomede island, with only a weather station. You may also be able to check out a crashed Li-2 plane on the island as well.

Can You Travel From Alaska To Russia?

You can travel between Alaska and Russia, although the journey may be much further than possible. This is due to the customs and immigration processing requirements on both the US and Russian sides.

The closest distance between Russia and Alaska is only 2.5 miles (4KM) between the Diomedes islands. You can even walk to Russia during winter. However, this is not possible since there are no immigration checkpoints to allow you to stamp your passports. You cannot be stamped for exit in Alaska and be given an entry visa to enter Russia.

This means you need to travel a little further than expected. The best is to probably take a flight, which will fly you from Anchorage to Moscow. The flight will be multi-leg, starting from Anchorage to Seattle, before you take a direct flight to Doha, Qatar. From Qatar, you then fly into Moscow. The journey may take you 36 hours to complete.

Can You Drive To Russia From Alaska?

You may theoretically drive from Russia from Alaska, although it may not be doable in a real situation. This is because there are no immigration checkpoints between the Big and Little Diomede islands, which means you will be entering Russia illegally even if you can drive over the ice during winter.

Theoretically speaking, you may be able to drive from Russia to Alaska. This is because the seas around Big and Little Diomede islands turn into ice during winter, allowing you to either walk or drive a vehicle on it.

However, in actuality, there may be more issues to contend with. First is the thickness of the ice. For ice to be able to sustain the weight of a car, it needs around 8-12 inches of ice. It may be hard to confirm the thickness, which means you may not be able to drive with confidence.

Since there are no immigration checkpoints between the Big and Little Diomede islands, you cannot get this done. If you still insist on driving, that means you will be entering Russia illegally, which is a crime.

You may like this article: What’s The Longest River In North America?

What Sea Separates Between Russia And Alaska?

Alaska and Russia are separated by the Bering Strait. The Bering Strait is between the Chukchi Peninsula in Russia and the Seward Peninsula of Alaska. It is named after Vitus Bering, a Danish explorer in service of the Russian crown.

The Bering Strait forms the maritime boundary between Russia and the United States, from 168° 58′ 37″ W longitude to about 65° 40′ N latitude, which is slightly south of the Arctic Circle.

At the narrowest point in the strait, it separates mainland US and mainland Russia by about 55 miles (88KM). This is the distance between the Chukchi Peninsula in Russia and the Seward Peninsula of Alaska.

The Bering Strait is named after Vitus Bering, a Danish explorer in service of the Russian crown. The strait is also subject to human migration theory, of how humans used Beringia to cross from Eurasia into North America as a land bridge.

The theory believes that the Bering Strait was dry land during the ice age, allowing prehistoric humans and animals to physically migrate to North America.

Share
Previous Do Wolves Hibernate? Things To Know About Wolves
Next Does Chapstick Expire? This May Surprise You