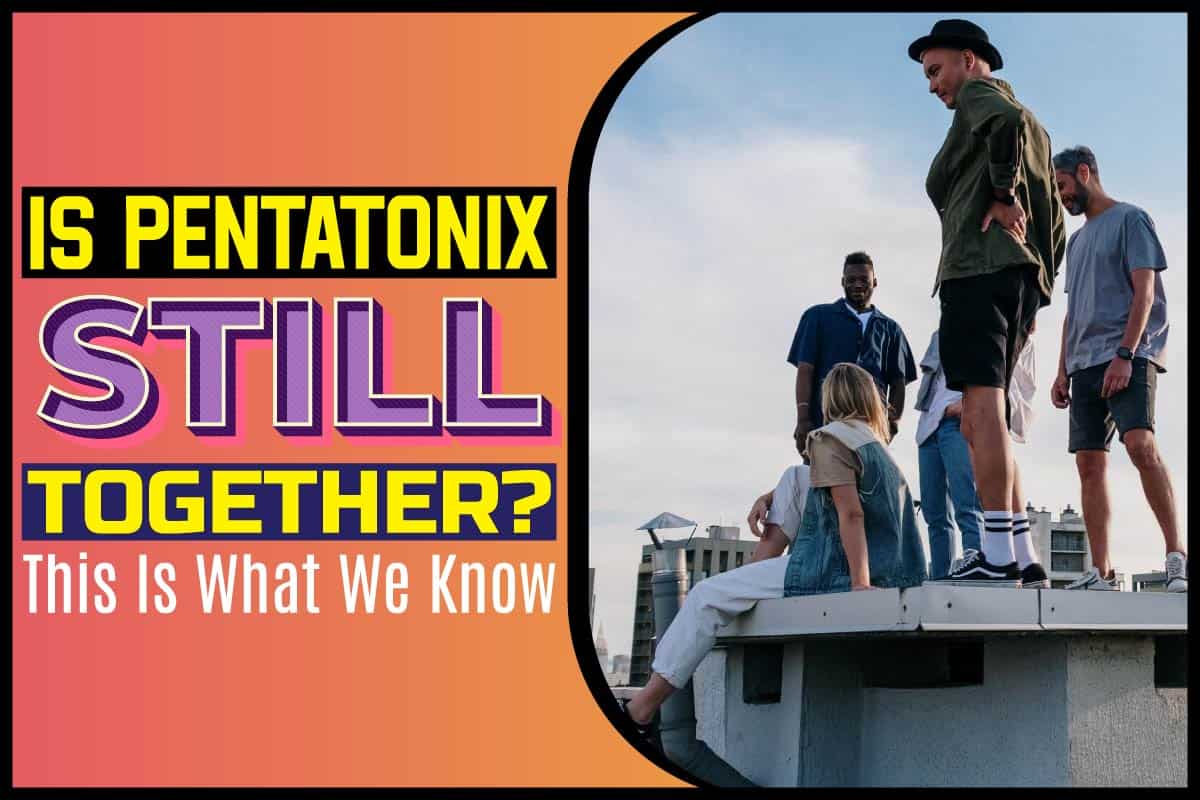 Is Pentatonix Still together? This Is What We Know If you’ve never heard of Pentatonix, you probably think that “chart-topping” and “a cappella” don’t mix.

The a cappella groups rarely make it near the top of the charts. However, Pentatonix seems to have found out how to make a cappella cool and extremely popular.

It’s easy to understand why the group has gathered so many fans over the years. They have extraordinary renditions of nearly every genre and their feel-good Christmas music.

Unless a cappella is done by Pentatonix, you may not love it. However, it hasn’t been an easy ride for the largest a cappella group.

Let’s dive into the question.

Is Pentatonix still together?

Yes, Pentatonix is still together. The members of Pentatonix have remained intact since its formation in 2011.

The third season of NBC’s singing competition led to the formation of Pentatonix. This show brought them fame as well as their eventual victory.

Currently, Pentatonix’s YouTube channel has 18 million subscribers and it has generated over 4.5 billion video views. This massive fame is because there’s so much about this world-leading a cappella band.

In this article, you’ll find out everything you need to know about the most famous a cappella group. So, continue reading for more information.

How Was The Pentatonix Formed?

Pentatonix has humble beginnings. The trios, Scott Hoying, Mitch Grassi, and Kirstin Maldonado, are three childhood friends from Arlington, Texas. They started making a cappella trios together while in the choir during their high school years.

The trio sang many a cappella selections during their high school’s spring choir concert. A video of their cover of Lady Gaga’s “Telephone” became popular on YouTube. It attracted a lot of attention with over one million views as of 2020.

Pentatonix founding members Scott Hoying, Mitch Grassi, and Kirstin Maldonado parted ways after going viral in high school. Then, they later reunited to audition for the third season of the NBC competition.

NBC requires a minimum of five contestants. So they found bassist Avi Kaplan and beatboxer Kevin Olusola on YouTube.

The trailblazers, Pentatonix, won the competition. They Became popular and received a $200,000 record deal after winning the musical competition in 2011.

The cappella band started their YouTube channel, where their pop-rock covers racked up over 1 billion views.

Members Of The Pentatonix Team

Pentatonix has had a tremendously successful career since its victory on NBC. They’ve released many chart-topping albums.

The band has gone on an extended tour throughout North America, Europe, and Southeast Asia. They’ve also made appearances in plays and films such as Bones and part 2 of Pitch Perfect.

So, who are the fantastic personalities of this a cappella group?

Scott is a founding member of Pentatonix and a native of Arlington, Texas. He gave the group its name. He also recruited the two initial group members, Kristin and Mitch, who were friends.

Scott Hoying is also a member of Superfruit, a comic music combo with Mitch Grassi. In addition, he is a pianist who was extensively interested in the theater arts as a child.

During quarantine, he performed a satire of the Les Miserables’ song, “I Dreamed a Dream.”

Mitchell (Mitch) Grassi, a childhood friend of Scott’s, was born on July 24, 1992. He is the third of the trio that established Pentatonix. Scott is also a pianist like MitchHoying.

Mitch just made his DJ debut during the quarantine period of the Movie pandemic. He debuted a collection of dark techno tunes.

He is the second half of the newly formed “Superfruit” group.

Kirstin Maldonado is a native of Texas (Fort Worth). She’s a childhood friend of Scott and Mitch, the trios who founded Pentatonix.

Before The NBC audition, Kirstin was featured in the viral “Telephone” video, which gave the founding trio immense internet recognition.

In 2018, she won her first Broadway role in Kinky Boots alongside Wayne Brady, a year after launching her solo career in 2017. Recently on the Lip Sync Battle, she sang “Look What You Made Me Do.”

Kirstin is the only female member of the group.

Kevin Olusola is known for displaying the art of beatboxing.He studied at Yale University. He speaks Mandarin fluently and plays the cello well.

Kevin was a member of the Yale Symphony Orchestra’s cello section and he has performed on both the piano and the alto saxophone.

Avi Kaplan was born in California native. In 2011, the founding members asked Avi and Kevin Olusola to join Pentatonix.

Avi is a guitarist who is well trained in jazz and opera. In 2017, he left Pentatonix to pursue a solo career.

Kaplan hasn’t entirely abandoned music. However, he’s now more interested in folk music compared to a cappella songs. He is currently signed to Fantasy Records and travels under Avriel & the Sequoias labels.

Furthermore, in the summer of 2017, he released his debut solo EP Sage and Stone. In 2019, he released four more singles.

AfterAvriel Kaplan left in 2017, Matt Salleebecame a part of Pentatonix as a bass vocalist.

At the age of four, Matt began musicals and has classical vocal training. In addition, he has played in several choir bands in the US.

Matt is a worship director at his local church. He just launched a worship album called Make Way from the stable of E58 Worship.

Is Pentatonix Likely To Break up?

Pentatonix has a demanding touring and recording schedule. Hence, it’s not surprising that a member of the band would love to take a break. However, this may be an indication that more changes were on the way.

Pentatonix’s probable breakup began when the group shared a video on Facebook featuring all five members. Then, Avi Kaplan announced that he left the band that had earned him fame and money in the video.

Kirstin Maldonado announced around the same time that she was already hard at work on her solo debut, which she will release under the name”Kirstin.”

In July 2017, she released one single, “Break A Little,” which sounds more like pop, not a cappella.She’s attempting to fill a void as a new top 40 female pop star in the music industry, and she could succeed.

Also, two other Pentatonix singers, Mitch Grassi and Scott Hoying, announced that they’d push their side project to the next level.

For several years, the two have been making funny videos with the name Superfruit. So far, they’ve amassed over two million YouTube fans using the same strategies that made them stars with Pentatonix.

Avi Kaplan and Kevin Olusola have recorded solo EPs. But they’ve not received the same level of popularity as their other teammates.

Will these artists be able to succeed on their own? Although, they have large fan bases who bought their records and moved them to the top of the charts on multiple occasions. Some may not be as familiar with their new identities.

Pentatonix is well-known, but what about Superfruit and Kirstin? With these new record labels, will they be able to carve a niche for themselves?

Interesting Facts About The Pentatonix

Here are some interesting things you may not know about the Pentatonix. Check them out.

They name themselves Pentatonix after a 5-Note Music Scale:

Each octave in the pentatonic scale has five notes. This 5-member group practices daily, for up to eight hours at a time.

They use their voices as instruments:

One of the most significant challenges of the best world a cappella act is using their voices. It is about figuring out the arrangement of songs in tune with vocal instruments.

However, they see this as a fun challenge as they’ve gotten much better at it compared to when they started.

They are always together: You may assume that a group like Pentatonix that produces vocal harmony should spend a lot of time together. Yes, you’d be right. They do almost everything together regularly.

The group even agreed to enroll in a French lesson as a group. The Pentatonix is known for their incredible interpretations of popular songs.

It would interest you to know that they took a French class when they decided to cover AS Stromae’sPapaoutai.  Pentatonix took this class to ensure they knew what they were singing. In addition, they wanted to be sure they got the French interpretation properly.

The world’s best a cappella act, Pentatonix, is still going strong. Since its inception in 2011, the members of Pentatonix have stayed intact. In 2017, they did have an exchange of one new member.

The group won three Grammy Awards and numerous other awards. They also have over 1 billion views with two YouTube Music Awards.

However, the most popular a cappella group is finally considering if they can go their ways and make it independently.

This new beginning may give a positive outcome because it allows them to explore who they are as individual artists. In addition, they may experience a level of success they’ve never had before.

Do Planeswalkers Have Summoning Sickness

Share
Previous What Comes In Groups Of 8? Unraveling A Mystery
Next Why Does He Want To Get Me Pregnant So Bad? These Are The Reasons